This is the first time I've tried doing an Illustration Friday using Adobe Illustrator. Before this, I drew in pencil, then traced in sharpie, then scanned, then computer-colored in paint-shop pro. This time it was totally digital. I'm not sure which I like more.

Anyway, this week's Illustration Friday is "BLUE." This is what I came up with- 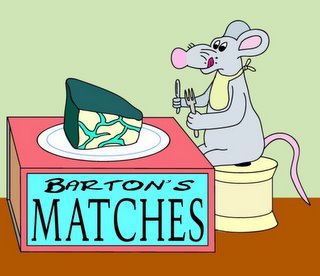 Each Friday, Illustration Friday presents a topic and invites bloggers to contribute an illustration suggested by the topic. This week's topic is: 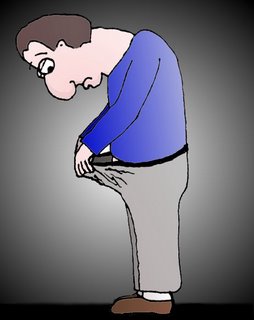 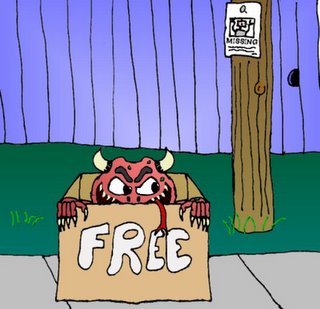 Join in the fun at http://www.illustrationfriday.com/

Take a visit to the Clownfessional! 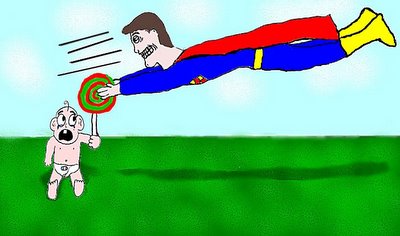 Almost Worth Listening To

It was a hot and muggy night in the city that always sleeps and, as I sucked the last few precious drops out of the bottle of vanilla extract, I knew that on a night like this, some little nobody of a stoolie would come knocking at my door just asking for a knuckle sandwich with a side of elbow. My name? I don’t remember. Wait a minute, it’s written here on this piece of paper. Domino, Domino Pizza.
For some reason, that doesn’t sound quite right.
But before I had a chance to reflect upon why an ad for my services would have a special deal for pepperoni, my mind lifted itself out of its boozy half-conscious state just enough to notice that there was someone standing in my office. Someone curvy and soft and sweet-smelling, someone wearing a low-cut beautiful evening gown and black, stiletto-heeled shoes, someone with long, curly red locks of hair and full, pouty red lips, red like fire, soft brown eyes and a three-day-old beard.
“Oh,” I said trying to hide my disgust. “One of you guys again. Look, I told the newspaper that the personal ad was put in the wrong section, but-” The guy in the dress looked me over from head to toe and whistled a long, low whistle.
“You’re a mess, you know that, Finklestein?”
“What did you call me?”
“A mess.”
“No...no, what did you call me after that?”
“Finklestein.” So. That was my name. I thought Domino Pizza didn’t quite fit. I looked around the office for a slip of paper and a pencil so I could write it down and the palooka in the evening gown continued. “That is your name, right? Yeah, I thought so. You still notarize documents?”
“What’s it to you?” That’s good. Play it cool. Take it easy. You never know when a Joe might have a banana or an issue of the Saturday Evening Post concealed on him somewhere.
“I’ve got a few papers I need you to sign. Here’s the address. Come at three o’clock sharp.” He thrust a greasy fist in front of me and dropped a crumpled piece of paper on my desk. Like all other items dropped on my desk, it instantly camouflaged itself and became lost in a pile of crumpled pieces of paper. “And come sober,” he said disgustedly.
Come sober. That’s a riot. I hadn’t been sober since...what was today anyway? Well, since Torenzi died. I couldn't handle it anymore. It’s not like it was in the old days, just Torenzi and I against the world, notarizing without care. Now the job was a drudge, something I didn’t really feel like getting up out of the pile of my own filth to engage in. Still, a fella’s gotta eat and, damn it, even if I was an old drunk has-been, I was still a notary public and a good one. The Charlie in the frock turned to leave, but I called out to him.
“Hey, buddy. Let me ask you something.”
“Yeah?” he asked, turning around in a twirl that made the dress billow up around him revealing his legs, hairy and covered in disgusting blackheads.
“Why are you wearing that low-cut evening gown and those black stiletto-heeled shoes?”
“Because I can’t wear white after Labor day,” he said, turning towards the door and taking off faster than a teenage girl’s bra in the back of a Dodge. That reminded me. I had to get the old Dodge fixed and find a teenage girl, but there would be time for that later. Right now, I was on the job. I didn’t know who I was working for or where I was supposed to go or what I was supposed to do when I got there or why I was stapling my tie to the desk, but I did know one thing. I was working again. After a brief celebration party with my two closest friends, Jack Daniels and Jack Radiator Fluid, I passed out on the floor and forgot all about the incident for the next six weeks. I never saw the man in the dress again. 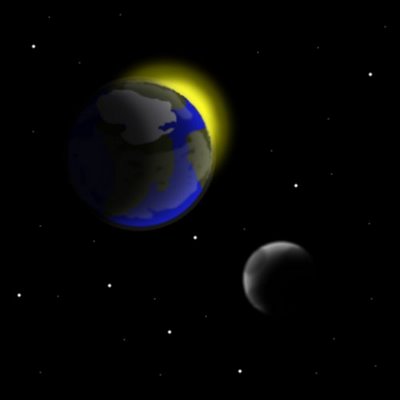 Welcome to my blog. Yay, exciting.